I went to the Vincent Van Gogh museum this morning. I had thought “I wonder…”
What I was wondering about was how to hear the audio tour.

I arrived at the museum and approached the audio tour people. They were only too happy to let me try it out before I committed to paying the 5€ fee.
I said that standard normal hearing headphones aren’t much good for me - quite noisy surroundings (school holidays, very popular museum etc), but…
I had my miniMic2 with me, and a 3.5mm cable male plug both ends. I plugged into the MM2 and the audio tour thing which was like an iPod/iPhone. I put the MM2 into cable input mode.
You cannot imagine - it was like a personal audio guide was talking to me. I had the MM2 on 80/20 so I could still hear if someone spoke to me, but background noise greatly reduced. You can’t believe how good it was.
A big shout-out to the Vincent Van Gogh museum staff. They were accommodating, concerned, helpful. Later when I spoke to one about the exhibit she seemed genuinely interested in my my opinion. I love VvG’s work. I saw an exhibit in Melbourne Australia (I’m from Sydney) last year and knew when I came to Amsterdam i’d have to see the major collection. Anyway, later i’d moved onto the bookshop, the interested young woman found me, thanked me for my input, and handed me a gift set of postcards. What an amazing gesture - it was emotional to start with, but this set me off! Of course now I’m on here telling you all about it, and some of you might come to Amsterdam one day. Check out Vincent’s museum, use the audio tour with your MiniMic. You won’t be disappointed.
Special mention to the people of Amsterdam too -they offer me their seats on the trams, very hospitable, VERY.
There are good people in the world. I found some.

Link to the Museum. Book online!! 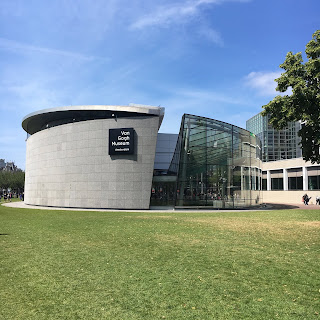